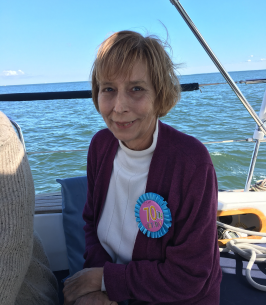 Pamela LaValley died Saturday, near her beloved home in East Hampton, Connecticut. She was 74 years old.

Born Pamela Robie in 1947 to parents Richard and Connie Robie, she grew up in Hingham, Massachusetts, where in fourth grade she determined she would be a teacher. Following that path, after graduating Hingham High School in 1965 she received an Associates Degree from Lasell Junior College in 1967, a Bachelors degree in elementary education from Boston State College in 1969, and a Masters Degree in education from the University of Hartford in 1973.

From 1969 to 1973 Pam taught second grade and kindergarten in Cohasset, Massachusetts and Hartford, Connecticut before starting a family. After marrying, Pam had three children; Jason, born in 1973, Bethany, born in 1975, and Matthew, born in 1976.

Returning to teaching in 1980 as an entrepreneur, she started The School House pre-school in Newington, CT, largely to have the flexibility to be there for her own young sons. As they got older, she returned to teach at the Kennelly School in Hartford, from 1987 before retiring in 2012.

Pam was predeceased by her parents, Richard and Connie, her sister Nancy, and her daughter Bethany. She leaves behind her son Jason, his wife Rebecca, their sons Jackson, Noah, and Bowen, and her son Matthew and his husband Nick. She also leaves behind a large number of nieces, nephews, and loving family members.

Pam described the joy of her life as seeing her sons as grown men. She was a gifted teacher, loving mother and grandmother, faithful aunt, and strong friend.

A memorial service celebrating her life (but with “no puffing!”) will be held on July 2 at 11 o’clock at Christ Church Episcopal in Middle Haddam Connecticut, followed by a private burial in Waldoboro, Maine.

Hall’s of Waldoboro has care of the arrangements. To extend online condolences visit their Book of Memories at www.hallfuneralhomes.com.